Crowd-funded science: thoughts after 185 people gave us $10,733 for research

I’ve spent the last month pushing our Experiment.com crowd-funding campaign, to support my lab’s upcoming research in the Falkland Islands. After successfully hitting our $10,000 goal with four days to go, I feel like I have a few thoughts about the process (and a lot of you have asked), so here goes:

Crowd-funding is hard. It took Dulcinea and Kit a lot of time to put their website together, and I spent a considerable amount of time pushing the campaign out via social media, email lists, and to our university press office (definitely do this! We got local TV news coverage), not to mention the time explaining to people how the whole thing works. The effort was, at times, on par with standard grant-writing. Be prepared to put a lot of time and effort into making a really fantastic site, and to follow up with a relentless social media presence. Which brings me to my next point:

Crowd-funding will only work if you’ve got a strong social media presence — particularly via Twitter. Most of our contributors came from my Twitter feed, at least until we got a large matching donation by Arthur Chu late in the game. In fact, for large (>$3000) projects, I really think it will take more than just the traditional social media push for crowd-funding to be successful. I had over 6,000 followers when we started, and I thought we’d have this in the bag, easily. I was wrong.

Penguins lined up to give to our campaign! #fakepenguinfacts (King penguins, Volunteer Point, Falklands. Photo by the author.)

If you can court a matching gift, or a large donation, especially from someone with social media clout, go for it. Arthur Chu (the Jeopardy winner) contacted Experiment after hearing about our project from his sister, who was my old roommate when I was a postdoc. I never met Arthur (though my cats did), but we still had a personal connection. Getting your work mentioned on a high-profile media site or by a relatively famous person will do wonders to get your work in front of new eyes. I also noticed a big boost during the fiasco around #thatshirt (and, in the aftermath, #scishirt)– people were really supportive as I was being harassed by trolls, and I got a bunch of new followers, too.

Because here’s the thing: asking for money is hard. Asking people you know, even just a little on the internet, is really hard. Asking them again and again and again for an entire month? That’s really, really, really hard. If you’re like me, you’ll struggle with guilt at asking folks to contribute and spread the word. Try breaking up when you ask — hit those European followers and your Australian followers. If my cat woke me up in the middle of the night, I tweeted. I tweeted first thing in the morning even though most Americans weren’t out of bed yet. Every bit helps.

We tried lots of angles — the climate change angle, the OMG PENGUINS angle, the women in science angle, and the science-funding-sucks angle. Finally, a little desperate, I started #fakepenguinfacts because I was sick of asking for money, and that was a good opportunity to have a little fun. It started as a joke but it really took off! I started noticing that the #fakepenguinfacts tweets were getting retweeted and shared much more often. People would join in and tweet their own (usually without linking, which was fine), and that just brought more eyes to our project page. It also kept me from going a little batty during the process.

Thousands of people looked at our site, but only 182 gave. This is fine with me, because not only does crowd-funding help raise money, but it also gets new folks looking at your research (which, in the long run, is what we really care about, right?). It may be that we could have lost people in the details of our site, too. Experiment has a pretty strict format (with word limits!), and while we really liked working with them, the site really hinges on getting people to watch your video, so if folks don’t do that, they miss important information that could be buried on the site. Plus, I’ve learned in my science communication efforts that often, what we think is really obvious is actually not at all. So, definitely get lots of feedback from non-experts on your site! 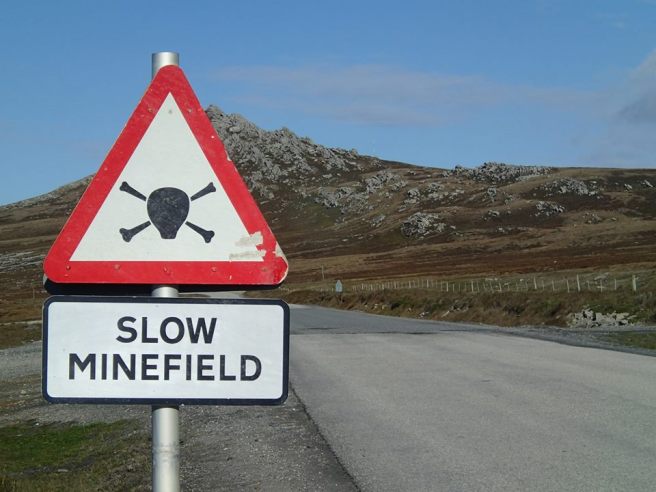 This is not a metaphor for discussions about science funding. This is a photo of the main road to Stanley, Falkland Islands. (Don’t worry, the mines are all on the SIDES of the road).

Speaking of Experiment, a lot of folks asked us why we used them, given that they take 8% off the top. What I liked about the site is that they gave us a lot of support, a really elegant and easy-to-use platform and, most importantly, credibility. Experiment is one of a few sites that are dedicated to crowd-funding science, and even the traditional crowd-funding platforms take a cut. What I liked about Experiment is that it looks legitimate, and it’s easy to give (they also have great analytics). When I first tried crowd-funding just on my own (to attend a conference in grad school), I found that people were often loathe to use PayPal or send checks. We only had one person balk at using Experiment.com and send a check instead.

Ultimately, I don’t think that crowd-funding is the magic bullet that will solve our the science funding crisis. It’s a lot of work, and I’d seriously worry about alienating my social media followers if I tried something like this too much. I think our lab can handle maybe one project a year, tops. And even so, I worry that the novelty is wearing off. Once people have been tapped a few times, will they keep giving? I’m not so sure. Compared with, say, Kickstarter, crowd-funding science tends to have fewer perks, so I’m not sure it’s really comparable.

TL;DR? Crowd-funding is a lot of work. It can be a nice funding stop-gap, especially for small projects or preliminary data. It’s great for students because it helps them develop communication skills. Sites like Experiment that have a nice interface to give your donors updates help connect people with your science, and add legitimacy to your efforts.Just be prepared to do a lot of work, get creative, and reach out to social media, the press, and celebrities. I’m not sure if science crowd-funding has a long lifespan, but it’s worth a shot. But it’s money! We all need more of that, right?

Update: I totally forgot to mention incentives! We were really hesitant to do them, because they cost money, and we wanted our money to go to the project, not to mailing hundreds of postcards from the Falklands with international shipping, or dozens of crocheted penguins. We ultimately did ad a digital photo incentive with our field photos, and added an expedition calendar for $100 contributions, because that was a fun and low-cost option. We added it midway, and I suspect a number of people bumped up their gifts to be eligible for those, which was nice.