ESA turns 100, and I turn 10: reflections on an ecological birthday

Last week I attended the 100th Ecological Society of America annual meeting in Baltimore. Happy Birthday, ESA! It also occurred to me that I’ve been going to ESA for ten years now (which means I’ve attended 10% of ESA’s!)– my very first was in Montreal in 2005, in the summer […]

Taking responsibility for our academic community: a response to sexism in the ESA’s list-serv

You’re enjoying your morning tea, browsing through the daily digest of your main society’s list-serv. Let’s say you’re an ecologist, like me, and so that society is the Ecological Society of America*, and the list-serv is Ecolog-L. Let’s also say that, like me, you’re an early career scientist, a recent […]

It’s Ada Lovelace Day, which is devoted to “sharing stories of women — whether engineers, scientists, technologists or mathematicians — who have inspired you to become who you are today.” I would definitely be remiss if I didn’t mention Dr. Evelyn Chrystalla Pielou, more often known as “E. C. Pielou,” […]

I’ve been mostly attending talks on community assembly and trait-based ecology so far, as both are subjects I don’t know much about but am interested in. I think there are some really neat opportunities to apply a paleo-perspective to both fields, and I’ve been kicking around potential project ideas for […]

Greetings from the Ecological Society of America Annual Meeting!

It’s been a whirlwind of a week: I deposited my dissertation last Wednesday and left for Providence, RI to start my postdoc at Brown, and then promptly boarded a plane for Portland, OR for the ESA meeting. This is my first time as a SEEDS (ESA’s group to promote diversity […] 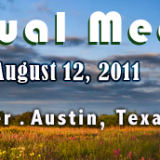 I spent Tuesday day meeting with colleagues, and thus attended few talks, sadly. I was elected vice-chair of the Paleoecology section during a productive lunchtime business meeting. If you’re not a member of the section, you can join for $5 any time– even at the registration desk at ESA. Chad […]

I’m in Austin for the Ecological Society of America’s annual meeting, which officially kicked off yesterday (Monday). Ignoring the fact that it’s Austin in August (which is admittedly less awful than I expected, coming from the much more humid Wisconsin), I’m having a blast. ESA is possibly my favorite meeting– […]