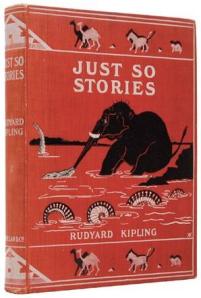 Sometimes, what we think we know about the natural world is based more on story-telling than the scientific method. Calling something a “just-so story” in science is almost universally intended as a criticism. The term is a reference to Rudyard Kipling’s collection of children’s fables that playfully use species traits as a framework for teaching kids important life lessons. “How the Rhinoceros Got His Skin,” “How the Leopard Got His Spots,” and “How the Camel Got His Hump” offer moral, rather than scientific, explanations for evolution. They’re entertaining, but not factually accurate (hence the pejorative).

In science, just-so stories are compelling because they’re simple, elegant, intuitive, and fun to tell. Ecology and evolution seem to be especially susceptible to just-so narratives, as researchers struggle to attribute the patterns they see in nature to a causal mechanism. Sociobiology, evolutionary psychology, and behavioral ecology have been (rightly) criticized both on political grounds, but also for a lack of scientific rigor. In the late 1970’s, Stephen J. Gould and Richard Lewontin famously criticized behavioral ecology, saying much of it was little more than story-telling, and that behavioral ecologists were so certain that species traits were adaptive that they weren’t bothering to test whether this was actually the case. When we rely solely on description, rather than rigorous scientific testing, our science is weak (this is something creationists have picked up and ran with when it comes to evolution), and it may even perpetuate harmful stereotypes (c.f. evolutionary psychology). I don’t think just-so stories are necessarily bad; some scholars like David Barash have suggested that they serve a purpose, so long as we treat them as hypotheses:

“We believe that a just-so story is simply a story, a tentative, speculative answer to a question, and, as such, a clarification of one’s thinking, ideally a goad to further thought, and, not incidentally, a necessary preliminary to obtaining the kind of additional information that helps answer a question (which, in the best cases, leads to yet more queries). When that happens—when the narrative is testable and generates fact-based research—then, in a sense, it is no longer a just-so story, but science, pure and … rarely simple.”

I agree with Barash that just-so stories are a good starting point; they set up theories, and ecology could use more prediction in general (see this excellent series of posts by Brian McGill at Dynamic Ecology). The real problem with just-so stories comes when we tell those stories over and over to the point that they become accepted as fact, without supporting evidence or rigorous testing. For example, in evolutionary ecology, it’s easy to interpret every trait as an adaptation, whether we’re talking about why giraffes have such long necks or the reason human females have concealed ovulation. Sometimes, in our quest to explain every single attribute in terms of natural selection, we forget the importance of random processes or other mechanisms that may be equally important in nature.

Because just-so stories make good narratives, I think they’re especially compelling to the general public, and this makes them insidious, and as tricky to stamp out as those misattributed quote memes– we want them to be true. Let’s be honest, here: which makes a better story? 1) The fluting in Clovis points creates effective blood channels, allowing hunters to effectively take down large prey like mammoths. 2) The fluting in Clovis points serves no practical purpose, and was probably decorative or ceremonial. I’ve always learned (and loved) #1, but there’s increasing evidence (so my archaeology friends and colleagues tell me) that #2 may be more likely. Bummer!

Fruit from an osage orange (Maclura pomifera)is thought to be an adaptation to dispersal by extinct ice age herbivores.

One of my favorite ecological just-so stories involve fruits thought to be dispersed by mammoths and other extinct megafauna. Since Janzen and Martin’s classic paper, Neotropical Anachronisms: The Fruits the Gomphotheres Ate came out in 1982, there has been little empirical work on the ecology and evolution of large-fruited plants and megaherbivores. I think this is due to a few factors: 1) People think it’s difficult or impossible to test these sorts of hypotheses. 2) Thought pieces that are critical of the hypothesis have convinced people that the Janzen-Martin Hypothesis is not worth testing. 3) People accept the just-so story of megafaunal dispersal syndrome because it’s so compelling, and don’t feel the need to test it rigorously. Personally, I don’t think megafaunal fruits or other just-so hypotheses are impossible to test, particularly with interdisciplinary approaches and outside-the-box thinking. I’ve got a grad student working on the problem right now, using some creative techniques.

The criticisms of megafaunal dispersal syndrome may be valid, but unless we test them, they’re just another form of story-telling (valuable though they may be). In the meantime, my grad student’s research, inspired by Janzen  and Martin’s hypotheses, may yield surprises of its own, thanks to some creative story-telling about the natural world. I think we should be looking to just-so stories for inspiration, but not necessarily explanation; they’re scientific horizons, not dead-ends.

What just-so stories need testing in your field of science? Which do you love (or love to hate)?