Winter is coming: climate change and biodiversity beyond the Wall

The following is a transcription of a keynote lecture given by Maester Abelard, instructor of natural history at the Citadel, at the 219th Congress on the Natural Resources of the Seven Kingdoms.

The Wall that separates the Seven Kingdoms from the wildlands beyond has long been lauded as one of humankind’s greatest feats of engineering. A hundred leagues long, and seven hundred feet high, the Wall is the largest human-made structure on the continent; indeed, it is one of the wonders of the world*. Its original purpose is shrouded in myth, as it was built some 8,000 years ago, well before recorded history. Lords in the North argue that it protects us from the wildlings, or worse; in the south, others dismiss tales of grumpkins and snarks with disdain. Such debates are beyond the scope of this address. What is known is that the Night’s Watch have faithfully garrisoned the Wall since it was built, which legend tells us dates back to the Long Night that brought the terrible Others out of the Land of Always Winter. 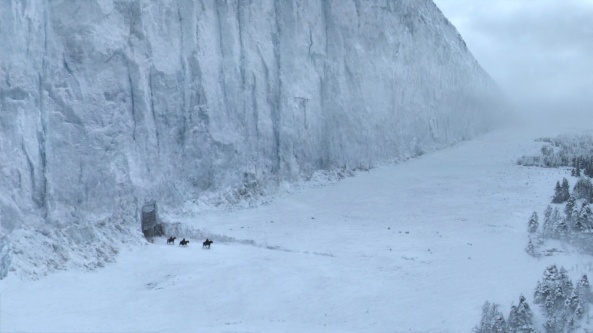 Members of the Night’s Watch riding through one of the few tunnels in the Wall, a highly guarded structure that is unsuitable for a wildlife corridor.

The Wall was designed to prevent wildlings, giants, and monsters from threatening the common folk of the Seven Kingdoms. But we also know from the rangers of the Night’s Watch that much of the wildlife beyond the wall are seen nowhere else in Westeros. The Haunted Forest, an extensive taiga north of the Wall, fits the royal definition of wilderness**, as a roadless area that is “untrammeled by man.”

Indeed, the cold, harsh climate of the wildlands makes agriculture highly impractical, and so the semi-nomadic wildlings must rely on less-intensive forms of subsistence such as hunting and gathering. This has made the land beyond the Wall an unintentional wildlife refuge where mammoths, dire wolves, great elk, and other creatures can thrive. In the Seven Kingdoms, especially in the more agricultural south, there are few wild places large enough for such creatures to roam, and much of the wild game is restricted to the king’s forests or the sacred groves of the Old Gods.

What little is known about the wild beasts beyond the Wall comes from the illicit fur-for-iron trade out of the wildling villgage of Hardhome. The animals adapted to the cold environments north of the Wall have evolved thick, lush furs that are highly prized by the luxury economies of Westeros and Essos. An examination of trade manifests from two recent ships, the Kraken’s Wrath and the Black Racer, reveal listings for common Westerosi wildlife, including hares, bears, foxes, stoats, lynx, and great deer, though these are described as much larger than their southern counterparts, with lush, white pelts that provide camouflage against the snow.

Some creatures, such as the woolly mammoth and dire wolf, have long been extinct south of the Wall, though my investigations of fossils archived here in the Citadel suggest that such creatures once roamed as far south as the Riverlands. These bones, which were unearthed during the excavation of the castle at Riverrun, bear a striking resemblance to those of modern mammoths north of the Wall.*** The strong affinity dire wolves and mammoths for cold climates suggests they may never have dwelt in the Seven Kingdoms during our long, warm Summers, so they likely migrated south when Winter made the wildlands too harsh a place even for them to survive.

But must have been before the Wall, which was built to keep the inhabitants of the wildlands out of the Seven Kingdoms.

I have seen precious little study of how the plants and animals beyond the wall survived the harsh Winters that descend at irregular intervals upon the country. The rangers of the Night’s Watch tell us of giants riding mammoths north of the Wall even today; I have studied the bones of their ancestors in the Citadel’s collections. But I have also examined the fossils of strange creatures resembling nothing so close as to the rhinoceros of Essos****, or beaver the size of the black bears of the Vale, and even giant cats with teeth like the curved blade of a Dothraki arakh. In my repeated inquiries by raven over the years, and even two separate visits to Castle Black myself, no ranger of the Night’s Watch could confirm that such beasts survive today.

And yet, the bones of the dead do not lie: it is clear that such creatures once dwelt in Westeros. What happened to these great beasts? 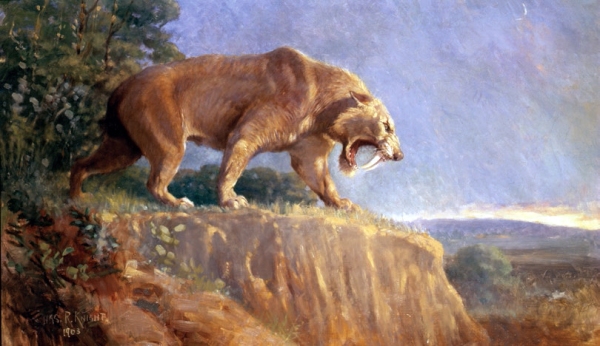 In my investigation of the fossils of the Seven Kingdoms, I have come to the conclusion that the Wall has formed barrier to the natural migration of beasts out of the wildlands, disrupting a natural cycle of movement from the Haunted Forest to the riverlands and back with the changing seasons.Winter is a harsh, cold, dark time in the north, and some Winters are said have lasted a generation. The climate beyond the Wall is harsh, cold, and dark even during our southern Summer. If the Wall trapped the woolly rhinos, the arakh-toothed cats, and other large beasts behind it, they would have been especially vulnerable when Winter made an already harsh land nearly inhospitable.

We know the wildlings have survived the Winter by raiding northern settlements and coastlines, and those few who remain north of the Wall likely relied even more on hunting than their contemporaries. The wildlife north of the Wall thus faces a double threat in Winter: climate change and human exploitation combined may have driven the woolly rhinos and giant beavers over the brink and into extinction. The added pressures of a growing fur trade will only exacerbate these risks. Will the mammoths and dire wolves that still survive beyond the wall today be doomed to the same fate when next Winter comes? What will happen to the Haunted Forest and other wildland ecosytems as they lose their top predators and keystone species?

The Wall has protected the Seven Kingdoms for countless centuries, but it has clearly had unintended consequences to our biodiversity. There are no corridors, no tunnels for the wildlife beyond the Wall to escape the Winters yet to come. It appears that the woolly rhinos and arakh-toothed cats paid the price for our safety, and the mammoths and dire wolves may owe the remainder of that debt. If Winter is coming for us, it is coming for them, too.

We must study these majestic beasts and learn of their habits and habitats. I urge the Crown to set aside wildlife corridors and protected reserves where they may roam free and unmolested, and for my fellow Maesters to educate the lords and commonfolk alike of the plight of the wildlife beyond the wall. If we do not, the mammoths may one day go the way of the dragons, becoming first memory, and then myth. May the Seven grant us the wisdom to protect their bounty before it’s too late.

***Maester Aemon of the Night’s Watch kindly supplied these specimens to me some years past, in return for a keg of cider from the Quill and Tavern.

****A diversity of such large beasts could easily have fed dragons in the eons before Aegon the Conqueror brought them to Westeros, but there is no evidence that they dwelt here before the Targaryens introduced them to the continent.

Thanks for reading! This post was part of a carnival of articles on the science of A Game of Thrones. Check out the other posts: