The extinction of the ice-age megafauna is one of the most persistent (and contentious) problems in paleoecology. Since the 1960’s, the literature has been dominated by fierce debates about whether humans or climate change were responsible for the demise of the mammoths, mastodons, woolly rhinos, and other now-extinct megaherbivores and their predators. It’s difficult to work in this field, as I do, without becoming involved in one way or another in the debates (even though my research actually focuses on the ecological consequences of the extinction, rather than the causes). Half a century later, it’s still fairly common to see one study condemning humans, and the next siding with climate change. This dualism has been really frustrating– we know that humans change their cultural practices in response to climate, for example– and answers to ecological problems are typically more complex than single causes. 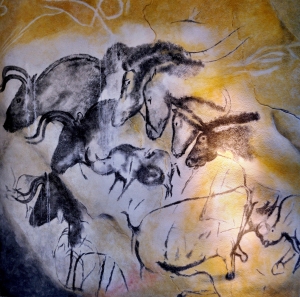 That’s why I was so very excited to see “Species-specific responses of Late Quaternary megafauna to climate and humans” (Lorenzen et al. 2011, subscription required) published in Nature last week. The authors include a powerhouse of interdisciplinary researchers (including radiocarbon dating experts, biogeographers, aDNA geneticists, archaeologists and paleontologists), led by ancient DNA (aDNA) pioneer Eske Willerslev at the University of Copenhagen’s Center for GeoGenetics.

The study elegantly combines population estimates from aDNA data with habitat ranges from species distribution models to determine whether woolly rhinos, woolly mammoths, wild horses, reindeer, bison, and musk ox experienced population declines due to habitat shifts during periods of climate change. If climate change-induced habitat change was a major determinant of population size, range shifts and population changes should overlap. Lorenzen et al. found that climate has indeed been a major driver of megafaunal populations for the last 50,000 years. Additionally, climate was sufficient to explain the extinction of musk ox and woolly rhino (based on the fossil record), but for the rest of the species, human activity (taken from the archaeological record) apparently played a role. In other words, both climate change and human activity was necessary to explain the extinction patterns at the end of the last ice age.

I love this study because it combines cutting-edge techniques like aDNA and Bayesian modeling with elegantly simple experimental design.  Lorenzen et al. also point out that each species responded individualistically to the combined effects of climate and anthropogenic activity, which is consistent with what we see in the vegetation paleorecord (Jackson & Overpeck 2000). The study does rely heavily on species distribution models, which can be problematic (Araújo et al. 2006), but the authors are careful to combine habitat ranges predicted by the SDM’s with the fossil record. The paper’s conclusions are not surprising in some ways–we know that climate change and human activity cause range shifts and extinctions today– but in my opinion this paper represents a major move forward in the discipline away from the constricting focus on climate or humans alone. I personally find synergies to be more exciting as an ecological problem, if also frightening from a conservation perspective; certainly, species today are experiencing the double (or triple, etc.) threat of human activity and climate change.

These findings are also consistent with my previous work using the Sporormiella dung fungus as a proxy for megaherbivores, which suggests that local population collapse in megaherbviores took place earlier than the final extinction event in parts of the Great Lakes region (Gill et al. 2009). I doubt Lorenzen et al. (2011) will be the nail in the coffin of the megafaunal extinction debates, but I’m hopeful that the shift towards interdisciplinary analyses, the development of novel methods, and large-scale collaborative approaches will spur new discussions on a classic problem.

Honorable Mention: I never thought I’d be looking to the Journal of Urology for interesting paleo papers, but Ivan Oransky tipped me off to this fascinating study published online last month by Angulo et al.: Phallic decoration in paleolithic art: genital scarification, piercing, and tattoos. Apparently, Dr. Angulo has published on similar subjectsin the past.

ETA: Moments after I posted this, I came across this wonderful piece by Hillary Rosner in today’s New York Times. It’s on a study by Pruvost et al. that came out yesterday in PNAS, which used aDNA to determine that the cave paintings of spotted horses like those at Pech-Merle were realistic depictions. Rosner’s piece does a nice job of highlighting how difficult it is to work with aDNA as well.